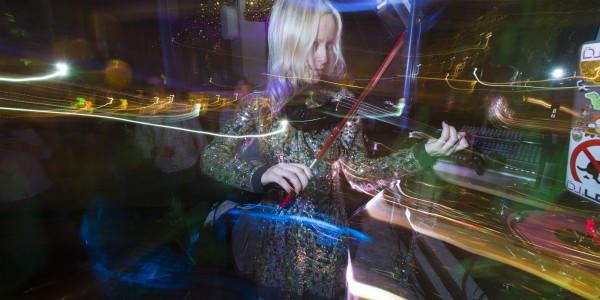 Latvian born and Chicago-bred, Katarina Visnevska has been re-defining the classical violinist image with the help of some strings and needles.

Born to a family of musicians, it comes as no surprise where the source of Katarina’s talent lies- and that she was destined to perform. Her grandfather, an opera singer, and grandmother, a violist in the Latvian Philharmonic Orchestra, started Katarina on her classical violin training at age 6. Years of musical training at the prestigious Conservatory Prep and the Emila Darzina Music Academy in Latvia fueled her passion for music, but for a spirited, fiery musician, the traditional world of classical concert performance frustrated her. It was after graduating from DePaul University’s School of Music that Katarina entered the world of improvisation.

“I like seeing people respond to music. Music is such a subconscious feeling…a language. Words can’t explain certain feelings the way music does, so to play something and get that emotion out of a human being is exceptional. In classical concerts, there is no interaction or response from the audience until the very end of a performance, but during my sets, I feel instant response from the audience. If they love what they hear, I know it!” says Katarina.

Her inspiration to change the way people experience classical instruments started when she came to the United States from Riga at the age of 16. In Chicago, Katarina was exposed to the world of house and hip-hop. Her curiosity (and frequent appearance) in the Chicago nightclub and DJ scene opened up a new outlet and possibilities of musical expression. “I was always intrigued by the concept of live music collaborations and dreamed about performing with a DJ. DJ’s are all about the feeling and communication with the audience, and I enjoy communicating with the listeners and getting them revved up,” says Katarina.

This intrigue for live performance and DJ collaboration has led Katarina to numerous residencies at stylish venues including Roof at The Wit Hotel, Cuvee, The Underground, Double A (the lounge below Mercadito), and Lumen. She has also been a featured guest performer for Akira, Chicago House, Christie’s, Event Creative, the Italian Chamber of Commerce, Macy’s, the United States Ski and Snowboard Association, Vogue, and Wilkhahn.

Katarina continues to perform solo as well as in chamber ensembles, symphony orchestras and bands. However, her satisfaction for full musical expression as a performer is with her current DJ collaboration, which allows her to freestyle and improvise to her favorite artists of the moment: Adele, Common, Gotan Project, and SBTRKT.